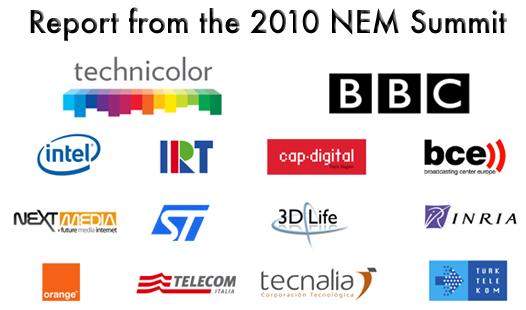 The third edition of the NEM Summit took place on Oct. 13-15, 2010 at the Hesperia Tower Hotel in Barcelona, following a General Assembly of the NEM constituency held the day before in the same venue and attended by over 100 delegates of NEM member organizations.

The NEM Summit has succeeded attracting in Barcelona over 360 participants and 50 exhibiting research organizations and companies, which allowed a fruitful exchange of information and networking during the two days, particularly in the perspective of the Future Internet ppp and NEM Calls recently launched by the European Commission.

This third edition of the NEM Summit included a new dimension – Art and Science – addressed through the NEMart contest, a sandpit workshop and a specific area of the exhibition devoted to collaboration between artists and scientists. Details about the NEMart event can be found in the NEM Art section of the present website.

On Oct. 14, the NEM Summit started with a plenary session during which Jean-Dominique Meunier, NEM Executive Director, and Josep Miquel Piqué, cluster development director for the City of Barcelona, welcomed all participants. Then, a video message from Neely Kroes, Commissioner for Information Society and Media, European Commission was delivered while Luis Rodriguez-Rosello, Acting Director of Directorate D at the DG InfSo of the European Commission presented his vision of the networked media field and the opportunities for further research activities. Roger Torrenti, CEO of Sigma Orionis, introduced the NEMart event and officially launched Wiki-art, a global art movement based on web 2.0. The plenary session concluded with a keynote session moderated by Vali Laliotti from BBC featuring a presentation from Alex Jaimes, Yahoo! Research, and a roundtable on “Future Business Challenges: how to monetize the electronic services at home, the social network in 2020, generic web-based applications and services?”, chaired by Dr. Joao de Silva, Research Fellow at the University of Luxembourg.

The first part of the closing session on Oct. 15 was devoted to a debriefing of the technical workshops by the respective session chairs, while Maja Kuzmanovic reported on the first NEM Sandpit. Finally, Thierry Coduys, artist and member of the NEMart jury, presented his creations based on media technologies, before Roger Torrenti announced the winners of the first NEMart contest.

Papers related to most presentations can be downloaded (when available) in the below conference agenda.